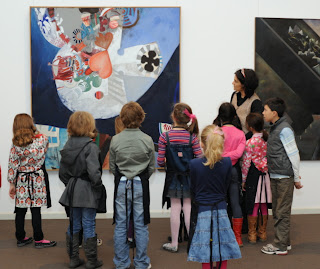 Small visitors are an art in themselves
they come into this space at full tilt,
hover on tiptoe, all eyes and eagerness,
a rapid consultation, point – that
way! – and away at a run
chittering like squirrels
and ignoring the good-natured
hushing of their teacher
as they animate the place with their pleasure.

A quiet girl has branched off on her own
to craft her answer to an assignment
unawed by her chosen
400-year old Byzantine icon.

Meanwhile the main tide flows
around where I sit, old man with a pen,
as if I am an exhibit not sufficient
to warrant their notice and I am reminded
of my own son years ago at eight or so
going up to a grim attendant at a National
Gallery somewhere and asking politely:
Excuse me, are you real?

Small visitors are an art in themselves
they animate the place with their pleasure.

An interesting afternoon spent mainly in front of Sydney Nolan’s Burke 1964 – starting with a visit from an old actor friend of mine, John Bolger.

We looked at the Nolan and he commented on: nakedness and vulnerability, the sense of being lost, sense of an aboriginal figure almost. I saw an interesting contrast between sharpness and blurred outlines and various other pictorial elements, too numerous to go into here.

Then I wrote: “The background is more than background, it is integral to the story. There is a narrative here. The face is detailed enough to attract our interest (too anonymous and the viewer turns off).”

I wrote a lot of notes on the colours used – ochres, blues, yellows, red. 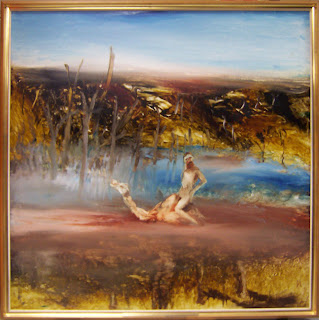 A lady joined me and pointed out the blood-red colour on the camel’s neck and in the water. She knew the story very well and had been to the DIG tree, her husband (who joined us later) being something of an expert on the whole Burke and Wills story. Their comments were valuable and interesting.

The painting insists that you be involved in the story – I found myself reasoning that it depicts a point in time when Burke has turned around (the horizon suggests that we are looking west, so Burke is heading south again on his way to die at Cooper’s Creek).

Burke’s stance is slightly effete – hand on hip – Europeanised. He is ironically naked and completely without all the ‘civilised’ accoutrements he set out with. He seems to have given up looking for help – ironically help was nearby if he had realized that the aborigines knew how to survive in this country and that Cooper’s Creek itself was full of fish.

You see how it is – we have turned the painting (which is one of a series on Burke and Wills) into a story, about which we already know most of the details.

The artist, in this sort of painting, selects a pivotal moment in a well-known, or clearly visible, story and presented it as representative of the whole narrative.

There are various other narrative paintings in this gallery; David Davies’ Under the burden of the heat of the day is more than a landscape with figures, it tells of the hardship of the life of itinerant workers in the bush; Tom Roberts’ Wood splitters also tells of a way of life; in another part of the gallery, look for 19th century historical paintings, or even the portraits of mayors and politicians tell a story, as does Noel Counihan’s On the steps of parliament house recently featured in an article in The Australian newspaper.

But, back to Nolan; I spent the next week researching, finding, for instance that the artist himself disagreed with my take on Burke, who I saw as a rather silly example of European arrogance – Nolan wrote that he regarded Burke as heroic. He sees fortitude where I see arrogance.

In my poem below, I stick to my own reading of the painting. Here’s the poem as it stands at the moment – after all that work, it’s a short poem (maybe there’s a ballad to come?):

Burke lost, going nowhere now,
going in his nakedness to die,
his camel half submerged
blue water spoiled with blood
on either side rich browns
and strident yellows, while Robert
O’Hara Burke, laid back and loose,
hand on hip, glancing up
and away from it all, affects
the nonchalance expected of the white man.

I do welcome comment, either on this blog or when I am at the Gallery on Wednesday afternoons.

I’m looking at two paintings, hung side by side – Robert Dickerson’s “Wynyard Station”, undated but around early 1950s, and Charles Blackman’s “Street Scene”, 1960. 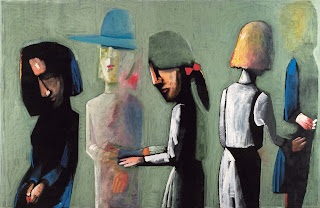 There are clearly similarities between the two paintings, similarities of construction particularly, but there are also differences, in fact contrasts.

Five figures in each, but in the Blackman the rather fashionable ladies are unconnected to each other; in the Dickerson his working-class people (or four of them) are huddled together defensively looking out at the passers-by.

I decided at some stage to write a single poem about the two, making the contrasts. But before I come to that, the Dickerson subjects reminded me of the “displaced persons” of my youth, just after the end of World War 2, the refugees from war-torn Europe. 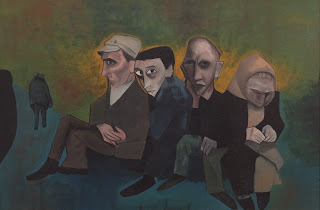 Displaced persons they were called, DPs
and we felt sorry for them
theoretically
but they were, well, different
you wouldn’t expect your sister
to bring one home
or dad would have had a fit
we lived in a decent suburb they
were cramped in inner-city streets
in houses a couple of paces across
and hardly room for a dunny out the back.
We’d see them on summer evenings
as we drove through sometimes
sitting out on the footpath for god’s sake
some sort of crazy continental idea
before they went back in for their
spaghetti and garlic
sitting drinking top shelf stuff
they probably made themselves out in the washhouse
look at them

having a hell of a time of it.

On this theme it will be interesting to have a look, at a later date, at Yvonne Audette’s 1955 painting, “Refugees”.

Meanwhile, here is the ‘pair of paintings’ poem, as it stands at the moment. Notice that I felt, in paintings like these, that it was interesting to put yourself in the place of the artist, that is, in the eye of the observer.

A Pair of Paintings

Together on a wall, five figures in each one
but so different. Makes you wonder
where the artist is in each painting

in the street scene here he is (you might think)
behind a shop window
looking through
at five fashionable ladies fashionably
apart each in her own preoccupation
of variously sadness, confidence, contemplation,
concern and misty resignation
two sharp faces closer to the imagined glass then
a fading face, a faded face, the back
of a head . . .
in Wynyard Station
they sit, working class folk, four of them
huddled together like wood swallows
looking or not looking at the artist
who is walking past and catching
a glimpse, caught in the act of
catching a glimpse – What’re
you looking at? That other bloke
walking away he stared at us too!

the working people are refugees
from all that they just want to get home
to where no one is going to ask any more questions. 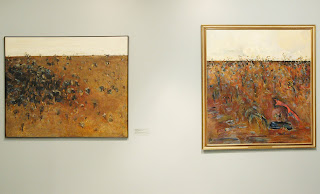 What do people see when they look at the two Fred Williams landscapes in the Powell Gallery?

Do they see smudges for trees and colours that suggest that blue-black is green and the land is rust? Smears and stabs of vague colour, randomly placed? Who ever heard of blue-black trees and rocks dissolving from the centre out?

Do they wonder briefly and walk away?

Of course most people who come into a gallery would know that Fred Williams is an absolute icon of Australian art and that these two landscapes might be worth a couple of million each.

That alone would make them stop and look.

And when you stop and look you realise, as I wrote in the first of two poems on Williams:

The land has entered his head
And re-appeared
As a Fred Williams landscape
And will remain that
For as long as paint endures
And people can see.

In other words, as John Brack said at Williams’ funeral, “Fred . . . changed the way we see our country.”

These two are early landscapes, both from the time when Williams and his wife Lyn were living in the Upwey area near Melbourne, but already they show the techniques that the artist was to keep, and develop, throughout his too-short career (he died of cancer at the age of 55).

There is the sense of looking down on the land from above, the way the trees seem to sit on the land as if they have just blown there, the distant horizon suggesting vast spaces and the vague suggestion of shapes within the landscape – as I describe in my second poem from that day.

With his lithe lightning-flash of speed
Heading for the flat far-off horiuzon’s
Unlimited possibilities?

You see, I looked at that fox and I wondered whether it had begun life as a mere shape that suggested a fox to the artist and became definitely one when he outlined the shape in clear, sharp lines.

I would love to have been able to ask him but, despite the fact that we had mutual friends, I never met him.

Finally, just a couple of notes that I made and subsequently did not use in the two poems above.

Colours: ochres, brown almost khaki (uniform) and blue-black. Above the fox as close to a burst of colour as W. will allow – gold berries and a smear of red repeated more subtly where the bushes show against the sky . . .

The land rusty with age
and flattened packed down
and bearing lightly
the burden of its trees.