February 21 was my first full afternoon ‘shift’ as Poet in Residence and I immediately showed my ignorance by plonking myself down in from of Arthur Boyd’s The Golden Calf. I did this because I know Boyd’s work well and I’m familiar with his favourite images – but I should have considered that his biblical paintings in particular are dense and full of characters and actions. 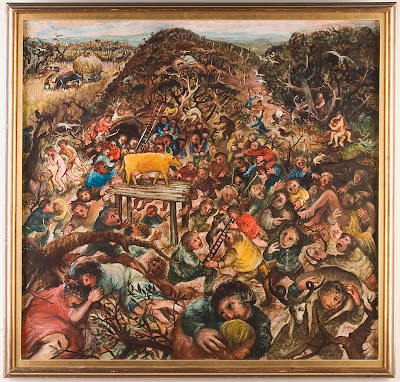 Arthur Boyd, The Golden Calf, 1946, oil and tempera on composition board, Purchased with funds from the Colin Hicks Caldwell Bequest Fund and the Ferry Foundation, 1995  © Bundanon Trust﻿


Eight pages of notes later I had an overlong, unendable series of lines describing the painting.


This putative poem had started off:

Ah Boyd, such a conglomeration of shapes
a hill becomes people, people
become ants. An ant hill.
The calf so golden/on his makeshift stage
the naked lovers so lit up by spotlight…

Some of this poem survived in one or other of the two poems that I finished with.


The complexity of the task I had set myself should be apparent from the two pages (out of eight!) from my notebook reproduced here: 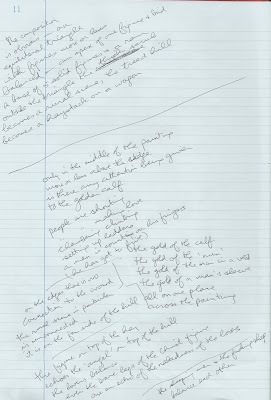 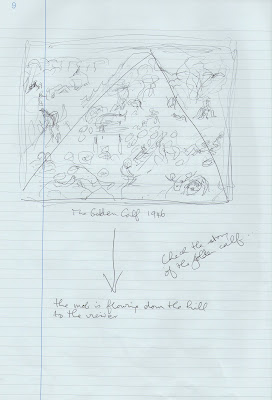 The more I look at The Golden Calf, the more detail I see and the less likely it will be that I can write anything all-inclusive.


I have been debating the merits of the prose poem with my friend, the poet E. A. (Anne) Gleeson - perhaps I could actually write a prose poem (even if I’ve argued that the two words are contradictory) that will represent the complexity of this painting by referring to items that stand out.


Here is the result, deliberately unpunctuated:


The calf so golden on his makeshift stage ignored almost entirely by the manic figures around him the lovers cuddling or chasing each other the old man picking up sticks the ladders to nowhere where a man (is it Jacob?) climbs to that nowhere the coupling animals the cock the bird of paradise the man dozing against a tree a Christ down from the cross being carried off tenderly his bared legs an ironic echo of the naked lovers on either side or of the dark praying bridegroom figure by the edge of the scene the biblical clothes red for power browns greens blues for the earth gold for idolatry and maybe anger people are sometimes detached heads or anguished faces people are shouting crying making love carrying away a dead curly horned ram clambering big-eyed climbing harvesting coming out of a cave surging down from the hill towards us a man is counting on his fingers children are clinging to the golden calf’s uncertain platform and away from it all a hay-wagon fully loaded in an unmown field with mangroves in the distance two horses one black one brown grazing two workers two other dark figures further away to the left up to mischief or not and on the other side thick scrub impenetrable where another ram menaces a man who cringes behind a tree-trunk two men gesture at white birds and an eagle is carrying off something blurred and undefined there is so much too much a chaos around the golden calf that leaves it abandoned and unprotected everyone clawed by the twisted limbs of the Australian scrub and above it all a red clad figure lying serene with a white bird close above its head like a halo or like hope.

I then added this note:

Painted early in Boyd’s life, when he was about 25 or 26, one of several bible-themed paintings, this iconic painting contains just about every one of the multitudinous symbols that Boyd used for the rest of his illustrious career. Many are detailed in the prose poem above. (My main reference is Arthur Boyd A Life by Darleen Bungey, Allen & Unwin 2008.)

Meanwhile, back at the Gallery, a group of school children gathers round, upper primary, I would say. I tell them what I am doing. Any questions?


“What is the most interesting thing to you about the painting?”


I’ve got to think fast. I answer that it is the composition, the triangular hill with the figures flowing down the hill towards the viewer.


What will I do with my notes?

How long will it take? Hours. I have to check a number of things about the artist. I have to shape the poem, decide what to put in and what to leave out. I have to write, edit, polish…

The last entry for the day in my notebook is: Don’t always feel that you must describe the work.