The overwhelming detail in Boyd’s The Golden Calf (see my last blog post) meant that some diversion was needed on that afternoon. One distraction that offered itself was, right next to the Boyd, an Albert Tucker Girl, painted in 1951. 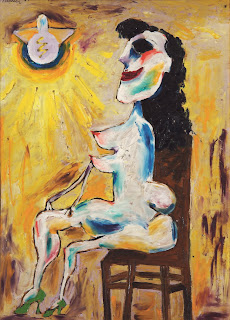 Now Tucker, I knew, had in wartime spent some weeks in an army posting that had him drawing the faces in the Facial Reconstruction Unit at Heidelberg Repatriation hospital – a distressing job that didn’t last long, but that no doubt coloured his art for a long time afterwards.

A little later, in 1947, he was in Japan recording the devastation of the US bombings of two years before – another distressing role.

Then he came home to find that his wife, Joy Hester, had left him. No wonder, after all this, that a portrait of a girl would carry elements of seediness and immorality – as here on this wall, a Picasso-esque depiction of a young girl.

Here is the resulting poem with some additional notes, which show how one thing can lead to another as I have to restrain myself from sailing off into French poetry and its influence on English.

The girl as prostitute
see the rouge
see the painted smile
see the brazen buttocks
the upraised breasts
the dark vague bush
of lust implied there
the long luxurious black hair
the body cut up and reassembled
and is it an angel or the sun’s
golden glow shining down on her
or just the blue light on a police car
and the accusing glare of its headlights?

Note: Tucker was much influenced by Eliot’s disillusioned view of the world as well as by Picasso’s disintegrating and distorted figures.

Carmen is thin – a bistre track
Gives her gypsy eye a hint of evil.
Her hair is of a sinister black
And her skin has been tanned by the devil.